I just want to send a quick check-in. We made it safe and sound. Sane but sleepy. We couldn’t have asked for a better drive.

The kids handled it beautifully, only losing it a little bit at midnight until I switched seats with Carson and he instantly fell asleep, and again at 3am when Ellie declared, “I can’t do this anymore. I’m not adapted to sleeping in the car like the rest of you!” Ha, ha. Oh kid. Considering Ben was trying to catch an hour of sleep on the 3’X4′ floor space behind the passenger seat which was reclined back overtop of him, she’s lucky she made it to Florida at all.

Immediately after this declaration I suggested she and I head into the Waffle House we were parked in front of for water refills and a pee break. I only mention this because as we were leaving, the server who helped me with the water perked up, reached into the counter and pulled out this book.

As soon as we got out the door, Ellie asked why the server gave her the book. I explained that a customer had left it behind, the server couldn’t bring herself to throw it out, and thought perhaps she would like to read it. With a scrunched up face full of 3am confusion, she then asked, “But how did she know my name was Ellie?” 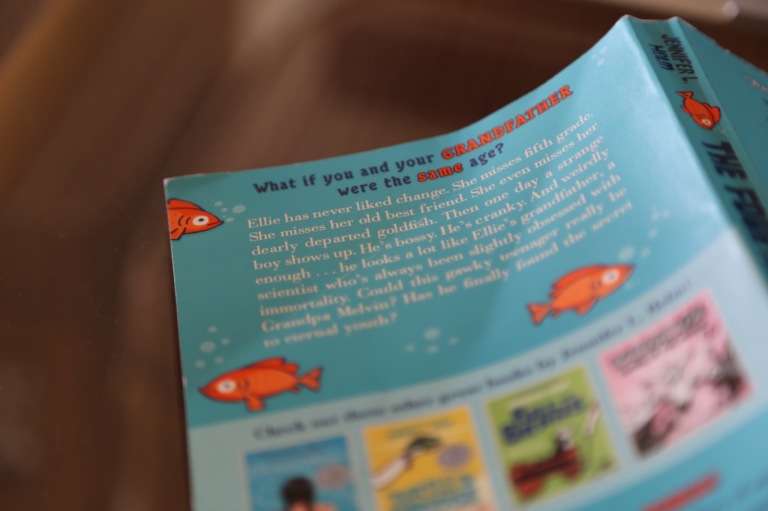 We’ve been coming to the same resort for years and booking the same unit for quite a few of them. Each year we have fun discovering what’s changed from the previous year. This year there are sun umbrellas at the pool (yay!), there’s a new bed spread, a new recliner, and…

…the latch on the porch screen door was removed.

It is dark and cozy where I sit at the eating table, looking out through the open sliders to the covered screen porch, that leads through a (single-hinged) creaky screen door out onto an open cement porch, a sand strip, the dunes, the beach, then the Gulf. It’s not so wild out there – groomed to tourist perfection – but the setting sun on the glistening water with pounding surf always makes me feel the wonder and awe of the great something More.